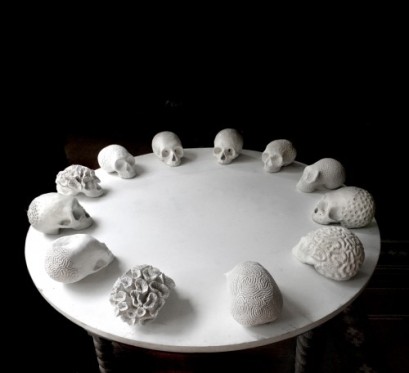 I thought I’d include some of my work from the National Museum of Australia. This is a video produced in relation to an on-line exhibition I wrote and curated on The History of Rabbits in Australia, part of a project involved in looking at the effect of invasive species on landscape and people. The entire project which involves writing, video and still images in relation to specific pieces in the National Historical Collection will be uploaded onto the N.M.A. website in the next month.
Jenny Pollack is a Sydney-based artist whose practice reflects her interest in the convergence of science and art. The museum holds one of her pieces (pictures of which are in the video). It’s on display in Old New Land Gallery. Jeremy Lucas directed and edited the film while I wrote it. It was shot on location at Jenny’s house and studio at Mackerel Beach in North Sydney. Jenny is an amazing woman, full of creativity and stories. She is someone who has lived her life just the way she wanted with compassion and grace. It was an honor to work with her.