In the Steps of the Yak

The  surface  of  the  snow  was  firm,  and  a  dusting  of  hoar  frost made  for  good  walking,  but  by  7:30  a.m.  the  temperature  was  ris- ing and the crust was fracturing with each step. It was heavy work, and  every  fifteen minutes  I  stopped  to  catch  my  breath.  Once  again I  found  myself  following  the  tracks  of  a  yak.  My  oxygen-starved mind became absorbed in the trail of prints. I began to interpret the mechanics of its motion. Each hoof-mark lay almost exactly the same distance apart; its gait was slow and methodical. The hoofs were lifted with precision, dragged through the snow and placed, slightly angled backwards, with metronomic consistency. The stride length varied little and the depth of the impression related more to the amount of snow than the angle of slope. The yak had created an imprint that stood  uncannily  at  ninety  degrees  from  the  vertical  and  I  used  the tracks as a single-laned stairway.

Morning wore on. I moved, literally, at a yak’s pace. It felt natural; the yak is probably the mammal most adapted to that landscape. As the steps wore on the economical, unhurried disposition of the yak permeated me. I realized the only rhythm that agrees with high altitude is slow and contemplative. I was drifting into the true nature of walking:  the  absolute  focus  on  each  step,  a  subconscious  awareness of my physiology. The physical mantra of walking was evolving in the steps of the yak.

Crossing the Kunzum-La – from my new book – Into the Heart of the Himalayas, 2014 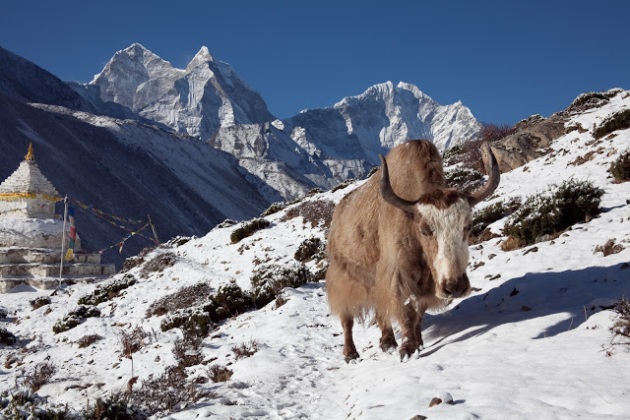